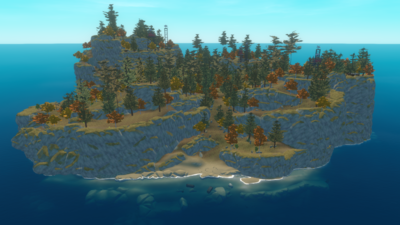 Balboa Island is an Environmental Element in Raft. It is the last location of Chapter 1.

Balboa Island is the third place the player visits while following the main game Story. The area resembles a National Park, having features such as trails and Ranger Outposts. It is also heavily covered in flora with few man made structures. Unlike the other Islands, Balboa Island is an Evergreen Island and therefore, home to Bears, and the first boss-level enemy; Mama Bear, both threats to the player, making it the most challenging area of the three in Chapter 1. The Island itself is a huge rock formation with a bending river flowing through it. The river is very narrow, so the player is most likely forced to swim to the Island from their raft, should they follow the river. Birch Trees and Pine Trees can be found aplenty, making Balboa Island a good destination for players looking to restock on Planks.

Balboa Island has a Ranger Station as well as three Relay Stations. More story related notes are spread around the Island than previous lore-related locations, making the Balboa Historian achievement slightly harder to achieve compared to the other historian achievements. Hints as to what has happened on the Island is revealed in notes, as well as some interesting visual hints. There are a lot less Quest Items on Balboa Island than Vasagatan, making instead exploration and traveling the more time consuming endeavors.

While exploring, the player will also find a number of Blueprints.

There are mainly two ways to enter the island: docking on a beach or swimming towards the center following a river from either of its ends. The beach has lots of rubble that covers the sand out into the sea floor, plotted among barrels and cargo crates (which hold no Materials). Some of the notable features of the area include a torn metal fence and multiple signs warning the player of the presence of Bears.

To get to the Ranger Station, the player must pass a small parkour course. The area has many large wooden spikes and neatly lined floating objects in what appears to be an Acid Pool. Jumping on the objects will cause them to sink into the fluid, making the parkour course a time-restricted endeavor. The Ranger Station itself has lots of loot, along with a quest to find tools around the island. Completing the quest will lead to a reference of an area in the next update.

The Relay Stations all provide a large Loot Box and are spread out across the island. They contain notes and puzzle items, and require passing a challenge to get to them. Station 2 is located next to the Ranger Station, making it the easiest station to visit. Relay Station 4 requires the player lower a draw bridge by hitting a lever, while Relay Station 6 requires a Machete to cut down vegetation.

Balboa Island is the biggest Island the player will experience in Chapter 1. Therefor it's a good idea to stock up on enough Sustenance and Weapons. Following are the main things to consider before going:

The unique items contained on the Island are used to progress in the Story and gain all the achievements. 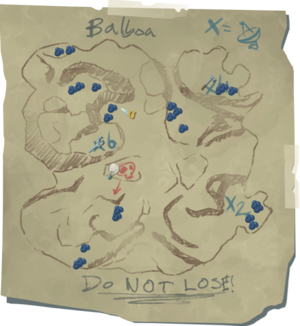