This page in other languages: Français - Türkçe - Español

Islands are Environmental elements in Raft. 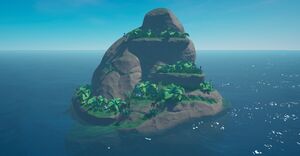 Islands are the main points of interest in Raft. They contain various food items and plants, as well as other useful Materials located on the surrounding ocean floor. Islands come in different shapes and sizes, with the available Materials depending on type and size of the Island. Abandoned Huts can be found on islands and underwater. All islands are designed by hand, so the player may eventually find islands previously explored. Materials as well as Sustenance items are always located in same spots.

Generic Islands currently come in two sizes: small and large. The Materials available are roughly the same, regardless of size, however Large Islands introduce Animals of both neutral and aggressive nature. The Large Island also provides a few additional items that are almost exclusive to Large Islands, with the exception of two small, Rare Islands. For an exhaustive list, see below.

Islands are spawned based on the relative distance to the raft. Islands will spawn outside the player's visible range and then come into sight as the raft moves closer. For the same reason, if the player forgets to anchor their raft, an Island will despawn even if the player is still on it if the raft moves out of range.

It is not possible to build structures on Islands.

A Small Island Seen from Above

Small Islands can be found from the start of the game.

There are a number of Small Island Variants, each with their own theme

The following resources can be found on most small islands, as well as Large Islands.

The following resources can be found underwater around Small Islands:

There are two small, Rare Islands on which the player can find special items. Whenever the game spawns an island, there's a 2% chance that it can be either of the following rare islands[1]. Both Rare Islands unlock a Steam Achievement. Shipwreck Island unlocks 'O Captain! My Captain!?' and Plane Crash Island unlocks 'Not a great landing!'.

As the name suggest, a small shipwreck can be found on this island. In the wreck, the player can find:

On this island the player can find a crashed air plane on the topmost hill. Following items can also be found:

Large Island Seen from Above

Large Islands are much larger than smaller type islands. After finding the Radio Tower, the player can find large islands by using the Receiver. They can also be stumbled upon randomly, like other islands, but not until after the Radio Tower has been cleared.

There are currently three different climate zones for the large islands:

The following resources are exclusive to the Large Islands, though not guaranteed (certain exceptions occur).

The large trees on these islands cannot be harvested, as is the case with the bamboo.

Apart from the unique resources on the Large Islands, a number of Animals may be found:

Following the Story of the game, the player will experience islands and places that are completely unique and offer different loot and objectives than the rest of the game.

The first stop on the journey. The Radio Tower is a platform, half sunk into the ocean. It's support-beams rely entirely on a single rock formation.

More information on the Vasagatan page.

A luxury yacht, beached on a small island. Home of Lurkers and darkness. Consists of many decks, which the player must climb to reach the next clue.

There are a total of 13 notes available on the Vasagatan - collecting all of them will unlock an the achievement 'Vasagatan Historian!'.

Balboa Island is the last island in the First Chapter. Balboa is home to Bears, as well as Birch Trees and Pine Trees, which drop Birch Seeds and Pinecones, respectively. Harvestable trees are significantly smaller than their decorative counterparts.

Left is harvestable, while right is not. 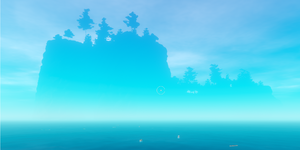 Caravan Island is the first island in the Chapter 2 update. It is a desert island, which is home to mutated warthogs called Mudhogs. The island, true to its name, is filled with old caravans (also known as motorhomes) that have been slightly torn down and stacked on top of each other, with ladders added for easy traversal between the houses. Most of the caravans have open-able drawers with item bundles that the player can pick up.

Tangaroa is the last location in Chapter 2. It is not an island per se, but rather a floating city encased in a glass dome, with engines allowing it to move. It is by far the most technologically advanced location in Raft so far, as well as arguably the most complex one in terms of details and features.