This page in other languages: Español - Türkçe

Raft is a Multiplayer/Singleplayer survival game developed by Redbeet Interactive, and published by Axolot Games. It premiered on itch.io as a prototype on the 19th of December 2016. It was then released in early access on the 23rd of May 2018 on Steam, for Windows, for the price of 19.99 USD/€ / 14.99 GBP. It is based in Skövde, Sweden.

By yourself or with friends, your mission is to survive an epic oceanic adventure across a perilous sea! Gather debris to survive, expand your raft and be wary of the dangers of the ocean!

Trapped on a small raft with nothing but a hook made of old plastic, players awake on a vast, blue ocean totally alone and with no land in sight! With a dry throat and an empty stomach, survival will not be easy!

Raft throws you and your friends into an epic adventure out on the big open sea, with the objective to stay alive, gather resources and build yourself a floating home worthy of survival.

Resources are tough to come at sea: Players will have to make sure to catch whatever debris floats by using their trusty hook and when possible, scavenge the reefs beneath the waves. However, thirst and hunger is not the only danger in the ocean… watch out for the man-eating shark determined to end your voyage!

Raft started as a student project at Uppsala University, Campus Gotland fall 2016. A group of three students, André Bengtsson, Ellen Mellåker, and Semih Parlayan, spent around 15 weeks half-time to create a prototype for a survival game set on an endless ocean. Said prototype was released for free on Itch.io December 19th, 2016, right before Christmas. While the group was home on Christmas break, Raft was starting to get noticed by more and more people, including YouTubers, and gained a lot of traction on Itch.io. 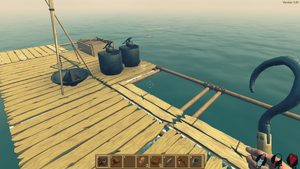 By the end of May the prototype had been downloaded over 7 million times and was covered by several major YouTubeers including Jacksepticeye, Markiplier and FGTeeV. This type of response came as quite the shock to the developers. They quickly decided to keep developing Raft into something bigger and better. With their sights set on a Steam Early Access release, they met with Scrap Mechanic developers Axolot Games in search for an investor and publisher. With their common passion for survival games both parties felt this was a perfect match and soon after decided to work together. With the support of Axolot Games, the team founded the studio Redbeet Interactive, moved to Skövde and continued the development of Raft.

In the four years the game has been developed a lot has happened. The original mechanics of Raft included expanding the raft with foundations, putting in "Nets" (now the Collection Net), and building ramps, pillars, and floor. Fishing and stabbing the shark was also part of the core game, however only raw mackerel could be caught with the fishing rod. Plants could be grown, but there was no way to replant the yields. The crafting system was very basic in the early days of Raft, with only a few select tools, such as a cup, spear and hook, and only two different stations in the form of the water purifier and a grill. Flotsam was an early part of Raft, but back then islands wasn't yet a thing, so materials such as Scrap could be found floating in the ocean. 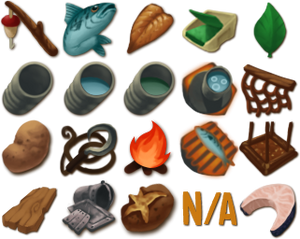 Some of the Original Icons of Raft.

The look of Raft has also changed drastically. The original game had very minimalist color usage feeding into the realism of the game. Palm Leaves, which were originally named "Thatch", were thin and pointy. When used on structures, Thatch was woven into a linen cloth before being used. The original foundations, as well as purifiers and grill, also looked vastly different from now.

While the visual Raft game has changed, a lot of the elements of the early Raft game can still be found in the game's code and assets. Many icons were kept, while others were remade, and pieces of old code have been allowed to stay since they could simply be disabled instead. This is a clear indicator of the progress Raft has gone through, with the developers going back and changing aspects of the game they feel have fallen under the threshold of what meets the game's current standards.