This page in other languages: Français

Raw Beet is a raw Sustenance item in Raft.

The Raw Beet is one of the early Sustenance items in Raft, and is found in Barrels floating in the ocean or in Loot Boxes on Vacated Rafts or Abandoned Huts. Once acquired, the Raw Beet can either be used immediately for consumption purposes or planted to yield more Raw Beets. A Small Crop Plot can hold three Raw Beets, with each beet resulting in two new beets for a total of six Raw Beets. It takes five minutes for the beets to grow once watered with Fresh Water.

Cooking a Raw Beet turns it into Cooked Beet. Cooking the Raw Beet increases its Hunger satiation by 33%.

The Raw Beet can also be planted in a Medium Crop Plot, though the yield is not improved in comparison to the smaller Crop Plot. 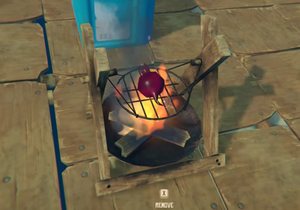