Redbeet Interactive is the developing team behind Raft.

Redbeet Interactive is a small studio founded in 2017 and Raft is its first and current creation. It is based in Skövde, Sweden and consists of four graphics artists, two programmers, a community manager and an intern. The team originally consisted of only two graphics artists, André Bengtsson and Ellen Mellåker, and a programmer, Semih Parlayan, but with the increasing popularity of the game after release, they decided to expand the team. 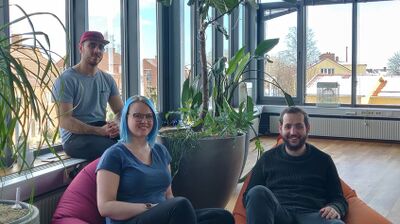 The original team all attended the Game Design program at Uppsala University, Campus Gotland, where Raft was conceived as a student project for the course Game Design in Practice (GDiP). The project was conceived as a response to the course's main goal: "Identifying a market need, prototyping a game to be tested by that market and examining the steps needed to launch a new business project"[1].

According to their website[2], the team works a 7-hour work day and offers wellness grants, as well as insurance and occupational pension to their employees. Their office has table tennis, a Switch and VR equipment for break activities.