This page in other languages: Español - Français

Sprinkler is a Food/Water item in Raft.

Researched at the Research Table. After building one, place a sprinkler on the raft to water Grass Plots, which are used to feed animals caught on Large Islands, or Crop Plots. Waters a three-by-three area. One spot left, right, and on top of the sprinkler and three-by-two in the direction of the sprinkler head. The Sprinkler has a maximum capacity valued at 30. One unit of water (the size of a Cup) fills a value of six, meaning five cups of either Salt Water or Fresh Water will fill it entirely. Each object watered by the Sprinkler takes one unit out of the maximum capacity of 30. This means that a filled Sprinkler is able to water, for example, a single Grass Plot a total of 30 times before needing a refill.

In order to operate, the Sprinkler must be powered by a Battery. Every single time an object is watered, the Battery is depleted a single charge. It has a total of 50 charges, which means for every full tank of water, 30 out of 50 charges are used. This means that a single Battery is good for 1⅔ full tanks of water.

The Sprinkler waters in cycles of 5 seconds. Every 5 seconds the game checks to see, if there's an object that needs watering. If there is, the Sprinkler will activate. If not, the game simply waits 5 seconds before checking again.

Since Update 12, the Sprinkler has a connection site for Water Pipes on the back, meaning that it can be connected via pipes to either a Electric Purifier directly or a Water Tank, allowing for the water refilling part of the process to be automated. Battery swaps are still required though; these can be recharged with the Battery Charger also introduced in said update. 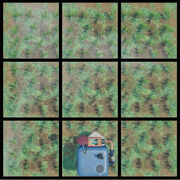 The Area Watered by a Sprinkler
Retrieved from "https://raft.gamepedia.com/Sprinkler?oldid=18470"
Category: