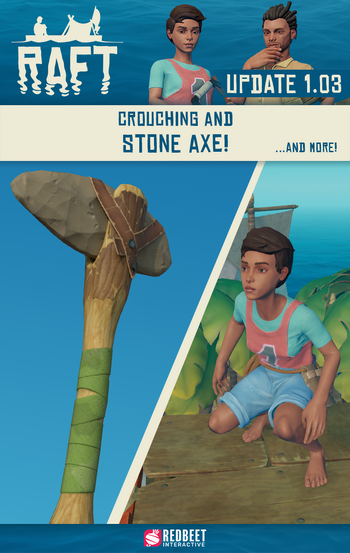 It is a little more than a month since the release of Raft and it has been great! We have been getting an incredible amount of amazing feedback and ideas. We have talked to so many of you, discussing balancing, getting help pin pointing bugs and hearing about what you think should be added and it has simply been great! However, we are not just talking here at the Raft HQ. We have also been very busy working on new content for the game. Last week we posted a concept of a new enemy. If you missed it, here it is again! 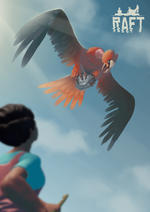 The new enemy is due for a later update. But that's not all. We should also have a blog post up next week revealing more things which are going on behind the curtains. Stay tuned! For now we have got some smaller additions, bug fixes and balance changes many of you have been asking for. Firstly, many of you have asked us to boost the axe, because it broke too fast. We agreed it was annoying when building larger Rafts having to constantly make a new axe. But instead of simply adding more durability to the old axe we decided to make a new one, the Stone Axe. This will have similar speed and durability as the old axe. In turn, the old axe will now be renamed as the Metall Axe. It will cost a little bit more to make but has better speed and much more durability. Hopefully you will like our solution, but if you do not, or if you have an idea on how to improve it, please comment! 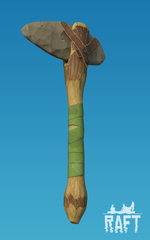 Secondly, many of you have wanted the ability to crouch, and we thought it was a reasonable request, so now it is here! You will now be able to build smaller passages on your Raft and actually get through them! Hope you will enjoy!

Lastly, some of you have run into the problem of having random Steam friends join your game. As a solution to this, you can now add a password to your world. Also, if you have unchecked "Allow friends to join" you will no longer appear in the Join world window at all, allowing you to play in a more incognito fashion.