The Vasagatan shipwreck is an Environmental Element in Raft, which contains both the Blueprint: Engine and Blueprint: Steering Wheel, as well as loose Plastic, Scrap, and several Loot Boxes with supplies. 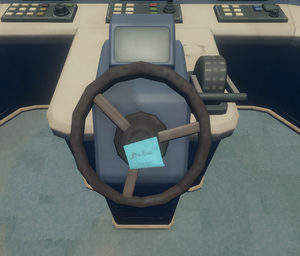 The wreck is situated in a small lagoon, located by following the receiver coordinates found in the Radio Tower. Access to the interior of the ship is via the rear.

The interior is composed of many rooms, most containing supplies. In addition to regular supplies, you will also find several unique items. The wreck also is home to several Lurkers. You may also find many notes, which explain the story behind the ship and its wreckage in more detail.

The blueprints for the Engine and Steering Wheel are in the wheelhouse at the top of the ship, access being provided by finding all the unique items. The wheelhouse will also contain a set of Receiver coordinates to Balboa Island.

Due to its size and layout nature, it can take a few in-game days to fully explore the wreck. It is recommended to bring supplies to explore the ship:

The unique items contained in the wreck are used to progress past locked doors and obstacles, eventually leading to the top.